NASCAR set to return to Wine Country June 12, 2022; Event shifts one week later than this past year’s race 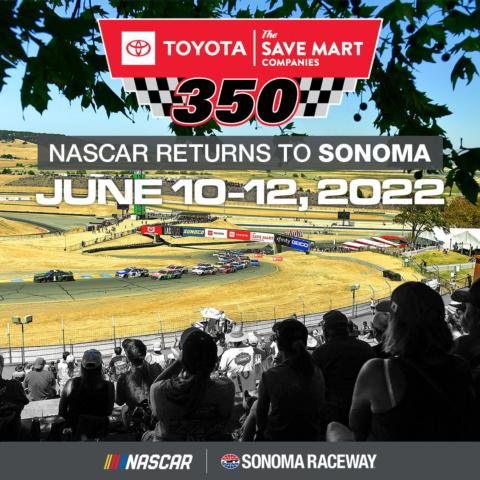 The Toyota/Save Mart 350 NASCAR Cup Series race will return to Sonoma Raceway on June 12, 2022, the series announced today as part of its full 2022 season schedule release.

“Race fans in Northern California have proven all summer how much they love having racing back at Sonoma Raceway,” said raceway executive vice president and general manager Jill Gregory. “Mid-June is the perfect time of year for racing here and we’re thrilled to be able to bring the greatest stock car drivers in the world back for the 33rd time since 1989.”

Race fans attending next year’s Toyota/Save Mart 350 will get the first glimpses of Sonoma Reimagined as the complex undergoes a major modernization that will position Sonoma Raceway as one of the leading sports and entertainment venues in California.

Companion events, practice and qualifying times and TV information will be provided at a later date.

Deposits for tickets and camping for the 2022 Toyota/Save Mart 350 are now being accepted. For more information, visit www.SonomaRaceway.com or call 800-870-RACE (7223).