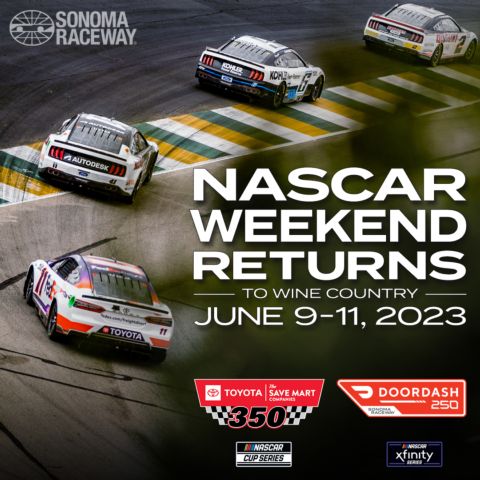 For the first time ever, the NASCAR Xfinity Series will challenge the picturesque rolling hills of Sonoma Raceway at the DoorDash 250 on Saturday, June 10, 2023.

The Xfinity Series is a proving ground for up-and-coming NASCAR Cup Series drivers and has produced some of NASCAR’s biggest stars. Fans will be treated to three days of racing action over the weekend.

“We are thrilled to have the Xfinity Series racing here in Sonoma for the first time ever,” said raceway executive vice president and general manager Jill Gregory. “This is part of our promise to our fans to keep raising the bar.  And we expect several of the Cup Series racers to pull double duty and run the Xfinity Series race as well.”

The 2023 date remains fixed on the same weekend as this past June. The Toyota/Save Mart 350 will span 110 laps and will run the historically popular chute configuration, adding to the fan experience with more opportunities for passing and on-track action.

Practice and qualifying times, other companion events and TV broadcast information will be provided at a later date.

Tickets and camping information for the 2023 Toyota/Save Mart 350 weekend can be found by visiting SonomaRaceway.com or calling 800-970-RACE (7223).