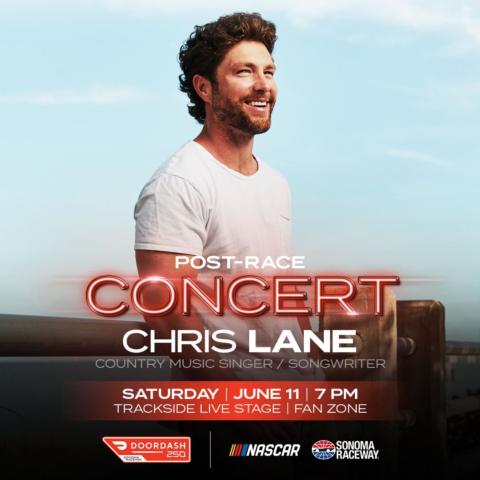 American country singer and songwriter Chris Lane will keep the party going in the fast lane when he performs on Saturday, June 11 at Sonoma Raceway. The post-race concert will begin at 7 p.m. following the NASCAR Camping World Truck Series DoorDash 250 race at the Trackside Live Stage in the Fan Zone.

The Kernersville, N.C. native once had visions of a potential professional baseball career but instead turned to music after injuries sidelined his sports aspirations. He created a music album while recovering from his baseball injuries which helped capture the attention of Nashville-based Big Loud Records, a label with ties to country stars, including Florida Georgia Line, Ernest, HARDY, and Morgan Wallen.

The Big Loud Records artist has been on the scene for nearly a decade now and has three number one country hits under his belt (I Don't Know About You, Big Big Plans and Fix). He has also received two award nominations for 'Best New County Artist' at the iHeartRadio Music Awards and 'New Male Vocalist of the Year’ at the ACM Awards.

Lane was No. 1 on Billboard's Twitter Real-Time Emerging Artist chart on the day of release, for his irresistible song "Fix" was one of the most shared tracks on Twitter in the U.S. from an up-and-coming artist. "Fix" shaped Lane's sonic direction and is the title track of his newly released EP produced by award-winning Joey Moi.

Lane's post-race performance will set the stage for Kyle Busch, Chase Elliott, Kyle Larson, Joey Logano, and the rest of NASCAR's biggest names to electrify Sonoma Raceway's 10-turn road course as they showcase speed and strategy the following day in the Toyota/Save Mart 350.

Tickets for the Toyota/Save Mart 350 remain by visiting www.sonomaraceway.com or calling 800-870-RACE.