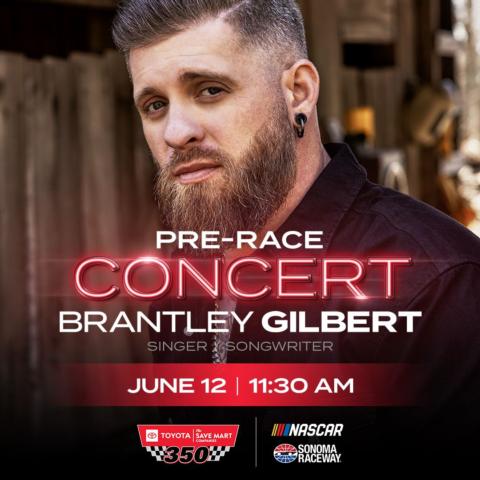 Originally from Jefferson, Georgia, Gilbert has ascended to the top of the country music charts with songs like “Bottoms Up,” “One Hell of an Amen,” and “What Happens in a Small Town.” Gilbert has been viewed as one of the most exciting, energetic solo artists in country music. He has also released five studio albums, with three hitting No. 1 on the Billboard Top Country Albums Chart, including the RIAA Platinum-certified “Halfway to Heaven,” RIAA Platinum-certified “Just As I Am,” and his most recent record “Fire And Brimstone.”

As of 2011, Gilbert has been signed with Valory Music Co., a division of Big Machine Records, a label with ties to country superstars such as Taylor Swift, Reba McEntire, Thomas Rhett, Rascal Flatts, Justin Moore, Ronnie Dunn, Jennifer Nettles, Eli Young Band, and so many more.

"There’s no better way to kick off this party,” said Sonoma Raceway Executive Vice President and General Manager Jill Gregory. "These fans deserve one of music’s most exciting acts, and Brantley Gilbert certainly fits that mold.”

Gilbert has racked up an impressive resume in more than 1 million album sales and multiple award show nominations from the CMA, ACM, ACA & CMT Music Awards. In 2013, he won the ACM for New Male Artist. As a celebrated songwriter, he has also penned No. 1 songs - "My Kinda Party," "Dirt Road Anthem," "Country Must Be Country Wide," and "You Don't Know Her Like I Do.”

Gilbert’s pre-race performance will set the stage for Ryan Blaney, Kyle Busch, Ross Chastain, Denny Hamlin, and the rest of NASCAR's biggest names to electrify Sonoma Raceway's 10-turn road course as they showcase the speed and strategy in the Toyota/Save Mart 350.

Tickets for the Toyota/Save Mart 350 remain by visiting www.sonomaraceway.com or calling 1-800-870-RACE.