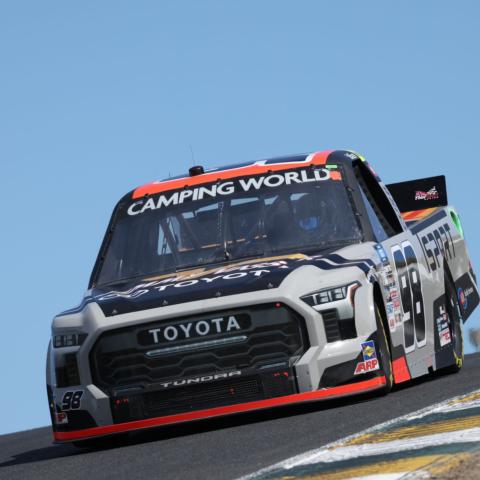 Christian Eckes wasn’t even born the last time the NASCAR Camping World Truck Series visited Sonoma Raceway over two decades ago, but he was fastest in Friday’s practice session as teams made their final preparations for Saturday’s DoorDash 250.

Eckes, 22, powered his ThorSport No. 98 Toyota Tundra to a best lap of 88.401 mph around the challenging 10-turn, 1.99-mile road course. The last Truck Series event at Sonoma Raceway took place in 1998 and was won by road course specialist Boris Said, who held off Mike Bliss for the victory.

Several NASCAR Cup Series regulars, including Kyle Busch, Austin Dillon, Alex Bowman, Ross Chastain and Harrison Burton, will join Eckes and the other Truck Series regulars for the much-anticipated 75-lap race, which is scheduled to take the green flag Saturday at 4:30 p.m. PT. The starting lineup will be set during qualifying tomorrow, which will begin at 10:05 a.m.

Eckes said the hot conditions could play a major factor in the race as temperatures are expected to be similar to today’s scorching heat that pushed the thermometer to over 95 degrees.

“I’m going to have to drink a lot of water to prepare for it,” Eckes said. “This is the hottest I’ve been in a race car in a long time. It’s going to be a long day tomorrow.

“It’s going to be a lot, the heat is a huge variable in racing, when the cockpit gets up to 130 and 140 degrees, it’s a lot. I feel like I trained pretty well for it this week. Hopefully I have prepared enough.”

Eckes says he is looking forward to getting a good qualifying spot in the morning and then chasing the victory Saturday afternoon.

“It’s a fun place, one of my favorite road courses so far,” Eckes said.  “This place has always been a tough place to pass. The passing zones are small, I think turn 11 and turn 6 are the best places to pass, so strategy will come into play. It always makes it exciting.

“Overall it’s an honor to be here at Sonoma.”

Eckes also said with the warm conditions that tire wear could become one of the deciding factors in the race.

“Tires are going to be pretty big,” Eckes said. “There’s a balance between turning through the corners well and having no drive off the corner. The goal for tonight and tomorrow morning is to try and fix that.”

Bowman, who is driving the Spire Motorsports No. 7 Chevy, was second fastest with a speed of 88.252 mph.  Chastain was third-fastest in his No. 41 Niece Motorsports Chevy with an 88.251. Truck Series regulars Matt DiBenedetto, Parker Kligerman and Chandler Smith were fourth through sixth.

Three-time season winner Zane Smith logged a practice speed of 87.826 mph in his No. 38 Front Row Motorsports Ford, good enough for eighth in the order. Series points leader Ben Rhodes was 12th in his ThorSport Toyota with an 87.496 mph effort.

Carson Hocevar, who broke his right tibia in a crash last weekend in the St. Louis race, split time in practice with Cup regular Daniel Suarez. Hocevar told his team that he was having fun when he was on track and is expected to compete in tomorrow’s race.

Dillon will drive the No. 20 Chevy and he was 31st in practice with an 85.619 mph best lap in his Chevy. Dillon said he is looking forward to racing in the DoorDash 250.

“I’m always looking forward to anytime you get extra time at a road course,” Dillon said. “For us, it has been really helpful over the last couple of years getting more laps. I feel like early in my career I didn’t do a lot of this, and I wish I had. It’s a lot of fun getting to go out there and run these trucks. Thankful for the opportunity from Tyler Young and we’ll just go have some fun with it.”

Jake Drew, from Fullerton, Calif., led the qualifying/practice combination session in his No. 6 Ford to set the field for the 64-lap General Tire ARCA Mendards West Series race, which is scheduled for an 11:30 a.m. PT start. Landon Lewis, from Ocean Isle Beach, N.C., was second in his No. 17 Chevrolet, Dale Quarterly of Westfield, Mass., was third in his No. 32 Chevy and Todd Souza, from Aromas, Calif., was fourth his No. 13 Toyota. Austin Herzog, from Clovis, Calif., was fifth in his No. 16 Chevy.

Tickets are available for Sunday’s Toyota/Save Mart 350 NASCAR Cup Series race, starting at $59 (kids tickets are $10), which gets underway at 1 p.m. PT. Saturday’s doubleheader featuring the DoorDash 250 and ARCA Menards West Series General Tire 200 are $40. Saturday tickets for children 12 and under are free with a paid adult.