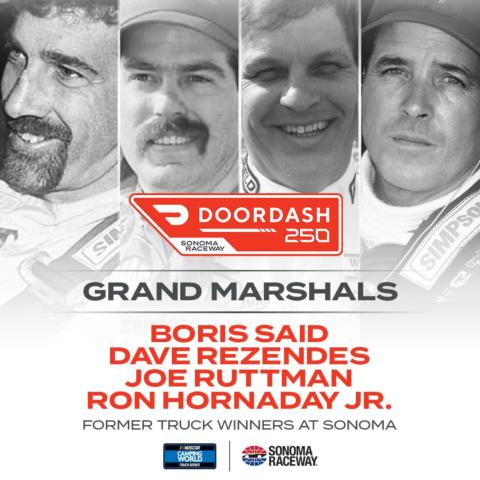 “NASCAR Trucks are back, and what better way to start the race than with the drivers that won it all here first,” said Sonoma Raceway EVP and General Manager Jill Gregory. “We know fans have been waiting for this day since we announced the truck race, and we’re all excited to see this new set of drivers take on this challenging course.”

In addition to all four past winners giving the command, Sonoma Raceway will have Mohammed Eid, better known as FaZe Faxuty by all 206k of his Twitch followers wave the green flag as the Honorary Starter for the inaugural DoorDash 250.

Faxuty is a content creator and live streamer on Twitch and YouTube who joined FaZe Clan after his fiery personality caught the organization's eye during the #FaZe5 recruitment challenge. Born in Los Angeles and raised in Sacramento, Faxuty has had aspirations to be a renowned gamer since he was a kid. He started as a Call of Duty player and has since expanded into several other games and genres.

In September 2020, FaZe, the professional esports and entertainment organization, opened its doors in search of its next 'FaZe Somebody', which gave a handful of deserving creators the chance to make a name for themselves. Among the hundreds that entered the FaZe5 competition was Faxuty, a streamer who had only begun seriously streaming six months prior.

While the pandemic had quite a negative impact on individuals, businesses, and even entire industries, it did result in some remarkable stories of growth for the 23-year-old, lifelong FaZe Clan fan, who in less than a year went from pulling 10-hour shifts most days to support his family to joining the organization he idolized. In December 2020, Faxuty was introduced as the latest member of the FaZe's Fortnite clan, and now we have the pleasure of introducing him as an honorary starter to our race.

The DoorDash 250 will serve as the 12th race on the Truck Series schedule. Two-time NASCAR Cup Series champion and the Truck Series’ all-time winningest driver Kyle Busch will be among the entrants in this year’s race. The event will be part of a tripleheader weekend that includes the Toyota/Save Mart 350 NASCAR Cup Series race and General Tire 200 ARCA Menards Series West event.

For tickets or more information on the DoorDash 250, visit https://www.sonomaraceway.com/events/doordash-250-and-general-tire-200-doubleheader/ or call 800-870-RACE. Weekend and single-day tickets are available; race-day tickets for kids 12 and under are just free with the advance purchase of an adult ticket.