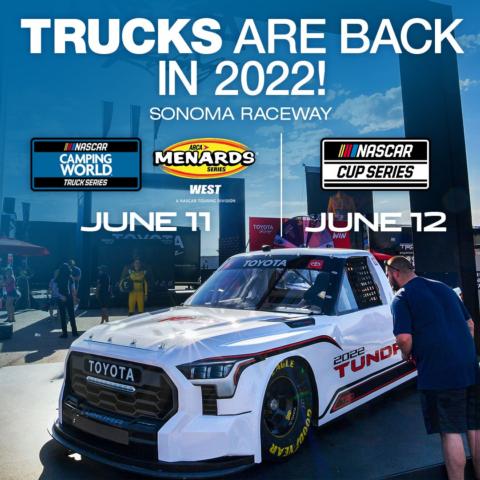 NASCAR is trucking its way back to Northern California. The NASCAR Camping World Truck Series will make its return to wine country for the first time in 24 years when it returns as a companion event to the NASCAR Cup Series race on Saturday, June 11. Sonoma is one of three new venues on the 2022 schedule, which was released today by NASCAR.

“This is such an exciting day for Sonoma Raceway,” said speedway executive vice president and general manager Jill Gregory. “The truck series was born on the west coast, and some of the most memorable moments in the history of that series have come on road courses just like Sonoma. This race will be a great addition to the biggest motorsports weekend in the Bay Area.”

The truck series competed four times at Sonoma from 1995-1998 with Boris Said winning the last race in 1998. The return of the trucks to Sonoma will coincide with the Cup Series’ annual visit to the picturesque road course. A complete weekend schedule of events and race start times will be announced later.

The Truck race will run as a doubleheader with the General Tire 200 ARCA Menards Series race the same day. Start times have not been set.

Tickets for the Sonoma NASCAR Weekend are available now on the Sonoma Raceway website.