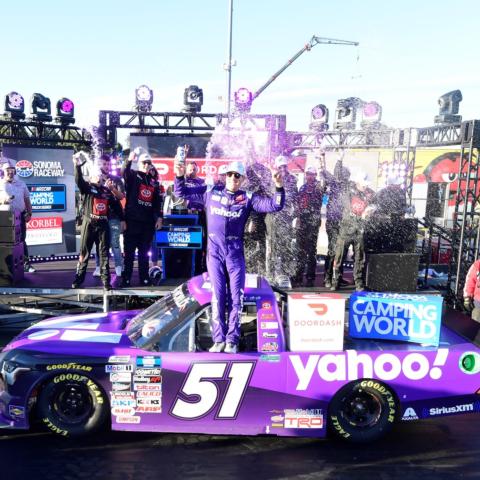 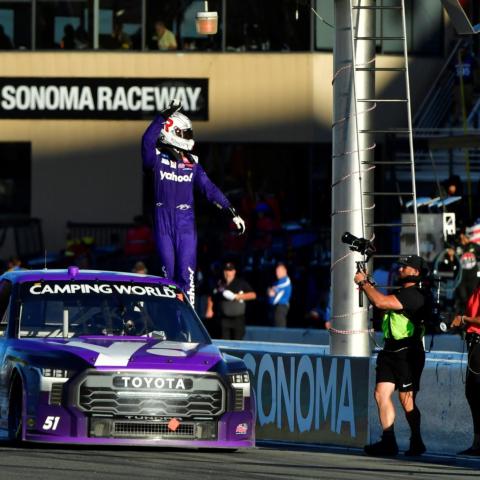 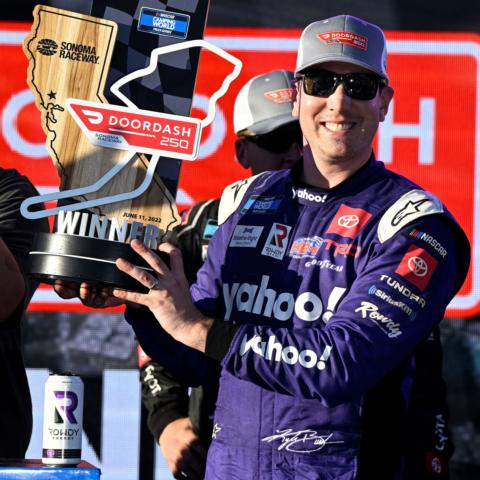 Kyle Busch extended his impressive annual winning streak to a decade in the NASCAR Camping World Truck Series Saturday by winning the DoorDash 250 at Sonoma Raceway.

Busch, the all-time winningest driver in the NASCAR Camping World Truck Series with 62 career victories, won a truck race for the 10th straight season and for the first time ever at the scenic and challenging 10-turn, 1.99-mile road course in California wine country.

“It’s important,” Busch said about getting his first win of the season and pushing his season win streak to 10 years. “Being able to do that and to continue that tradition and to win at some new tracks is really cool. I can’t wait to go celebrate.”

Busch started in the third spot and powered his No. 51 Yahoo! Toyota into the lead and went on to lead 45 laps in the 75-lap race. After building a large lead in the late stages of the race, a few cautions in the closing laps caused him to have to focus on getting some fast restarts to hang on to secure the victory.

Busch was thrilled to take the checkered flag here at Sonoma and add this trophy to his massive collection. Sonoma Raceway hasn’t hosted a Camping World Truck Series event since 1998.

“Anytime you can go to a new venue and win it feels good,” Busch said. “To get a win here, the trucks haven’t been here in a long, long time, so from the nostalgia part of it with the truck series being born in Bakersfield, that was a cool thing. It was a lot of fun.”

Busch said his truck was flawless today and his crew made the necessary adjustments after a lackluster performance in Friday’s lone practice session where he clocked the 13th fastest speed.

“It was good continuing to work on the truck and making it better,” Busch said. “This Tundra was awesome today and really proud to drive it. Today was really good. Yesterday was ugly. I wasn’t sure about it and the guys worked on it all night long, they made some changes. It may not look like it at times, but I know the effort is there.”

Truck Series points leader Zane Smith had a good day, charging to a second-place finish after starting 13th in his Front Row Motorsports Ford.  On the race’s final restart he wasn’t able to stay close enough to Busch to challenge him at the finish line.

“I definitely didn’t start out too good,” said Smith, a three-time winner this season. “Luckily I went the right way. I hate finishing second, especially to him. He got too far out front and I think that last lap was the fastest for me, but I wish I was a little closer so I would have had a shot at him.”

Daniel Suarez rallied and brought Carson Hocevar’s No. 42 Chevy home in sixth place after Hocevar had to be relieved on lap 11. Pole-sitter Hocevar was racing with a broken tibia but had to start in the rear after a crash at the end of qualifying damaged his truck. When Suarez took over the team was two laps down.

“It was very busy today, but the truck had good speed,” Suarez said. “I was hoping to make up some ground. To finish in the top six was pretty good. The truck was capable of winning the race, but we just ran out of time.”