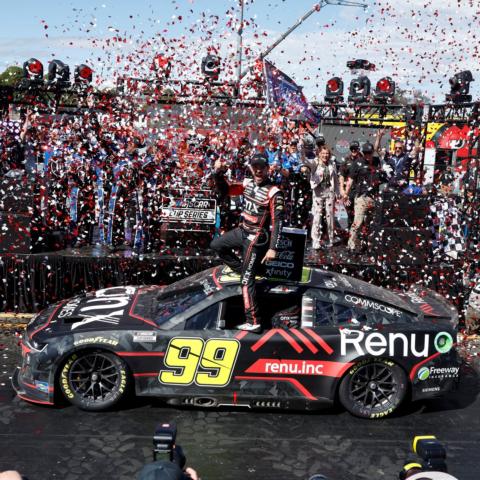 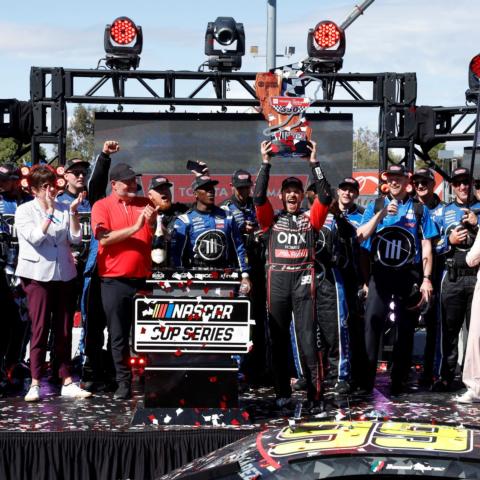 Pole-sitter Kyle Larson won the race’s first stage and then Joey Logano claimed the second stage. In the final stage, Suárez, a native of Monterrey, Mexico, took over. He led two times, first on lap 61, and then he took the lead for good on lap 85. He led 47 of the 110-lap race around the challenging 10-turn, 1.99-mile road course in his No. 99 Trackhouse Racing Chevrolet.

Suárez, who was smooth behind the wheel, began to pull away from the field in the closing laps and finished nearly four seconds ahead of second-place Chris Buescher. He becomes the fourth first-time winner of the season. His win came on his 195th career start.

“I have so many thoughts in my head right now,” said Suárez, holding back tears. “It’s been a rough journey in the Cup Series. These guys at Trackhouse Racing believe in me. All my family in Mexico still believed in me and never gave up on me. A lot of people did, but they didn’t. I’m so glad we could make it work.”

Suárez also gave a victory speech in Spanish and followed with, “This is the first one of many.”

The victory was a popular one. Suárez had a huge contingent of his official fan club Daniel’s Amigos cheering him on in the grandstands right outside Turn 1. Nearly every Cup Series driver gave him a wave or thumbs up on the post-race cool-down lap. In Victory Lane he celebrated his breakthrough victory with a Taco Pinata and punched it open, sending chocolate candy flying all around.

“I’ve been working very hard for this moment, not for myself but also for my team,” Suárez said. “I’m lucky that I have great people around me. Today felt good. We did it in front of a few hundred Mexicans in Daniel’s Amigos. To get my first win here is very special.”

“I knew that I was fast and I could race with them, but I hadn’t showed that first victory,” Suárez said. “The last five weeks we have had fast race cars but we have had things happen. It was hard to stay on track but in the end my team stayed together and we kept pushing. I told them that bad luck doesn’t last forever, but tough people do.”

Buescher, who missed the last race in St. Louis due to testing positive for COVID-19, ran strong all day and finished second in his No. 17 RFK Ford. Michael McDowell finished third in his No. 34 Front Row Motorsports Ford and was followed by Kevin Harvick and Austin Cindric to complete the top five.

Buescher, who led one time for four laps midway through the race, was pleased he challenged for the win but disappointed he didn’t get the checkered flag.

“We had a great car, just didn’t get it done when it counted,” Buescher said. “The car was really good with good speed. Congratulations to Suárez, we tried to get him, but ran out of speed there.”

McDowell’s third place run earned him his sixth top 10 of the season and keeps his momentum going as he tries to advance to the Round of 16 in the NASCAR Playoffs.

“I’m proud of everyone at Front Row Motorsports, the car was fast all weekend,” McDowell said. “I felt like we were close today. Proud of my team, we want to get this car in the playoffs so we will keep fighting.”

After cruising to the Stage 1 win, Larson had a right front wheel come off his car heading into turn two as he exited pit road and despite leading 26 laps he ended up in 15th. Chase Elliott had a problem in the pits with his left rear tire and then was penalized for pitting outside of the box. He was able to work his way back to an eighth-place finish.

Saturday’s Camping World Truck Series winner Kyle Busch ran great in the opening stage but his bid to sweep the weekend ended after a spin in the late stages of the race. He finished 30th.