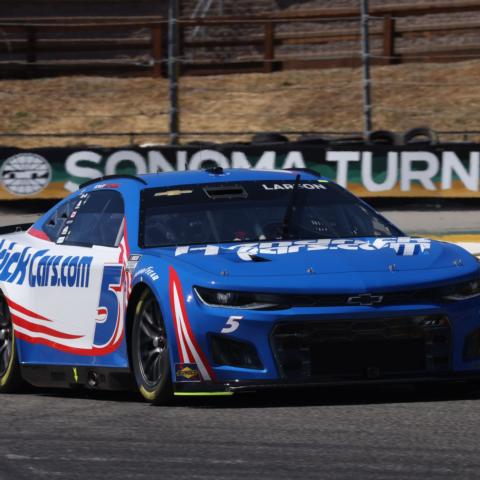 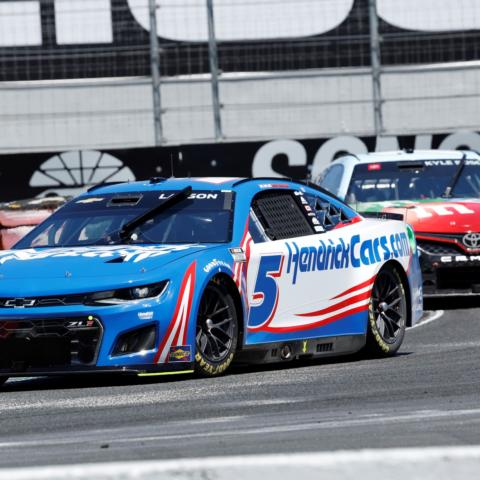 For the fifth consecutive year Kyle Larson will start the Toyota/Save Mart 350 at Sonoma Raceway from the pole.

Larson, the defending Cup Series champ and also the defending winner of this event, powered his No. 5 Hendrick Motorsports Chevy around the challenging 10-turn, 1.99-mile road course in scenic wine country with a fast speed of 92.111 mph. It’s the California native’s 12th career pole position in the NASCAR Cup Series.

“Really neat to get another pole here, that’s five consecutive I heard,” Larson said. “It was a good lap. I was a bit surprised that I ran that lap because I feel like I gave up a lot of time in turns four and seven. If I had those two corners back, I feel like I could have gone quite a bit faster. We just have a really good No. 5 HendrickCars.com Chevy. Thank you to everyone on our team and everybody back at the shop and the engine shop. I’m excited about it.

"For Chase (Elliott) to put down the lap that he did, I feel like that shows how strong he is because he was really good in race trim, too. I have to figure some things out on my end. I think my car is capable of racing good, I just have to get a little bit better on the long runs. Hopefully we’ll have a good shot at the win.”

Larson will start the 110-lap race (1 p.m. PT, FS1) alongside No. 2 qualifier Chase Elliott, who clocked a 92.083 mph in his No. 9 Chevy. It’s a familiar starting position for Larson, who in addition to his four straight earned poles, he also started from the No. 1 spot last year based on the previous race’s finish as qualifying and practice were not held during the event.

Larson says there’s really no comparison from last year to this year with the Next Gen car making its Sonoma debut this weekend.

“My car felt really good last year and was good compared to the field,” Larson said. “The cars are more equal this year. They seem to be more of a handful here this year versus last year. The cars don’t really drive that similar here.”

Larson, a native of Elk Grove, Calif., considers this event his home race and is expecting a big show of support tomorrow from his ever-growing legion of fans.

“I always feel the support when I come home and now that I’ve had success it’s exploded,” Larson said. “There’s supposed to be a Kyle Larson Grandstand here for the race tomorrow so hopefully we will see a lot of blue shirts up there tomorrow.”

Chris Buescher, who missed last weekend’s race in St. Louis due to testing positive for COVID-19, qualified third and was followed by Michael McDowell in fourth and Tyler Reddick in fifth.

Larson also was fastest in the Cup Series’ 50-minute practice session that took place prior to qualifying, posting a leading speed of 90.424 mph. Elliott was second with a 90.195 mph effort. Trackhouse Racing’s Ross Chastain was third in practice with a 90.125 mph run in his Camaro.