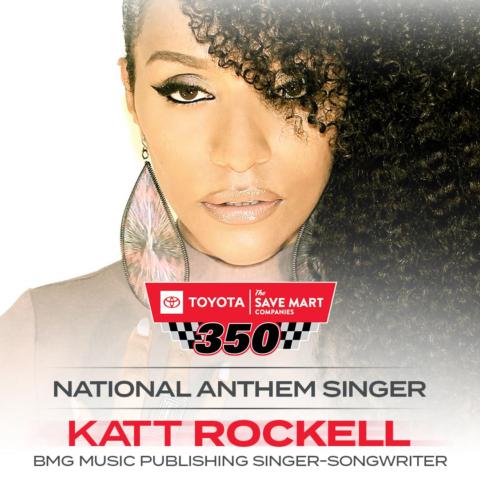 BMG Music Publishing singer-songwriter Katt Rockell currently rocking the scene, and this weekend she will make her first appearance ever at Sonoma Raceway as she performs the national anthem prior to the Toyota/Save Mart 350 on Sunday, June 12.

Known for her powerful vocals, distinctive flair, and influence by various musical giants, including Michael Jackson, Sade, A Tribe Called Quest, and Shirley Caesar, Katt is steadily rising to stardom status and carving a name for herself in the industry as an artist with a unique voice. Her highly proficient songwriting skills earned her accolades like a No. 1 spot in the Top 100 Singles for Asian superstar Joey Yung.

She has worked with several award-winning musicians such as Rick Ross, Dave East, The Lox, and John Legend, to name a few. She co-wrote and was featured on “Feel Alive” by DJ D-Sol, which peaked at No. 4 on the Billboard Dance Chart. She was also featured on Maybach Music V from Rick Ross’s project, “Rather You Than Me.”

For tickets or more information on the Toyota/Save Mart 350, visit www.sonomaraceway.com/events/toyota-save-mart-350/tickets/ or call 800-870-RACE. Weekend and single-day tickets are available; race-day tickets for kids 12 and under are just $10 and free on Friday and Saturday with the advance purchase of an adult ticket.