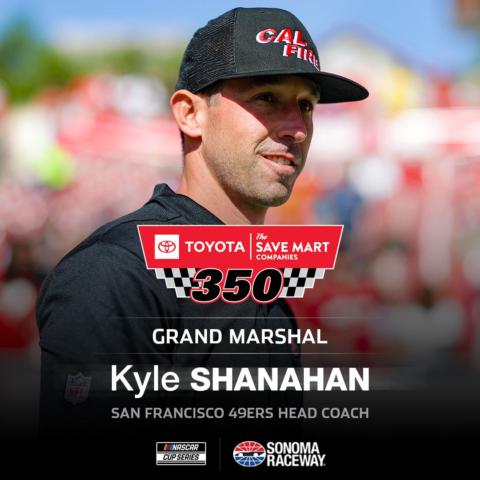 Shanahan, the 20th head coach in franchise history, will join Northern California Toyota representatives in giving the start command, “Drivers, start your engines” prior to the start of the Toyota/Save Mart 350. Shanahan joins other notable National Football League (NFL) personalities with quarterbacks Tua Tagovailoa (Homestead-Miami Speedway) and Derek Carr (Las Vegas Motor Speedway) having been NASCAR grand marshals this season. This will mark the first-ever NASCAR Cup Series race Shanahan has attended. He will be joined at the race by his family.

“I am excited and honored to be the Grand Marshal for the Toyota/Save Mart 350 this weekend,” said Shanahan. “This will be my first NASCAR event, and I’m thrilled that I get to share this amazing experience with my family. I can’t wait to fire up a field of NASCAR stock cars.”

In 2019, Shanahan was named Coach of the Year by Sporting News and NFC Coach of the Year by the Committee of 101 after leading the 49ers to a 13-3 regular season record, the NFC West Division Title and an appearance in Super Bowl LIV. San Francisco's nine-win improvement from 2018 to 2019 was the largest win improvement from one season to the next in franchise history.

Shanahan was 26 years old when he was named the wide receivers coach of the Houston Texans, becoming the youngest position coach in the NFL at that time. At 28 years old, he was named the offensive coordinator of the Texans and was the youngest coordinator in the NFL. He also served as a ball boy for the 49ers when his father, Mike, was the offensive coordinator for the team from 1992-94. Mike helped guide the 49ers to a 49-26 victory in Super Bowl XXIX.

Sonoma Raceway has reached its allowed capacity for Sunday’s Toyota/Save Mart 350 NASCAR Cup Series race, June 6, and will no longer sell tickets for the event. Those not able to attend Sunday’s race are encouraged to tune in to Fox Sports 1 at 1 p.m. (Pacific Time) to watch NASCAR’s first race in wine country in 714 days. Visit www.SonomaRaceway.com, call 800-870-RACE or follow @RaceSonoma for more information.