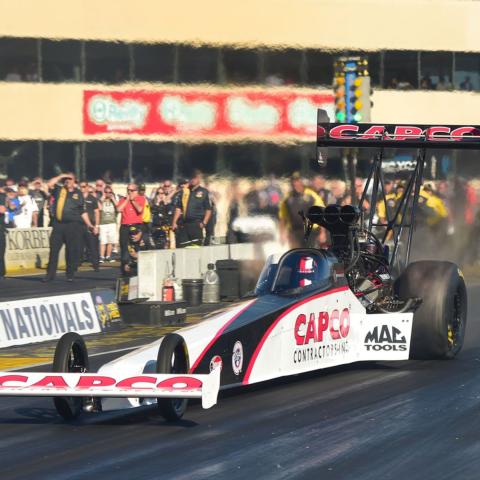 Top Fuel driver Steve Torrence will look to become the first driver in a decade to sweep the Western Swing at the 32nd annual NHRA Sonoma Nationals at Sonoma Raceway this weekend, as the class points leader races for his ninth victory of the season.

Torrence, the defending Top Fuel world champion and current points leader, rolls in to Sonoma fresh off Sunday's win in Denver. The victory marked Torrence's second Denver win and the 35th of his career, including his ninth straight final round.

Torrence claimed his only Sonoma victory in 2017, defeating three-time Sonoma winner Antron Brown in the final round. With a Sonoma victory, Torrence would be in the hunt to sweep the three-race Western Swing, which concludes at Pacific Raceways outside Seattle, Aug. 4. Brown was the last driver to complete the sweep in Sonoma in 2009.

"I don't believe I've realized what we've been able to accomplish over the last couple of years, and when you're in these moments you need to relish them and enjoy them because they don't last forever," said Torrence, who tied Don Garlits on the NHRA's all-time wins list with the Denver victory. "We've been able to maintain that consistency and the team we've assembled, we've been able to have these guys together for six years continuously. They've made the right calls and decisions, and they've given the crew chief the right car time and time again."

Torrence will face stiff competition in the likes of San Jose's Mike Salinas, who has claimed two wins so far this year, but has not yet won on his home track. Fan-favorites Brittany Force (John Force Racing) and Brown (Don Schumacher Racing) will also look to taste victory in Sonoma.

In Funny Car, points leader Robert Hight (John Force Racing) will look to make it two in a row in Sonoma, after claiming his second Sonoma win last year. Hight maintains the NHRA Funny Car national speed record, which he set in Sonoma in 2017 (339.87 mph), as well as the track elapsed-time record (3.807 seconds). Eight-time Sonoma winner and 16-time Funny Car Champion John Force is poised to capture his 150th career victory and first of the season, while three-time Sonoma winner J.R. Todd and four-time Sonoma winner Ron Capps look to find the Sonoma magic of years past.

The NHRA Sonoma Nationals kick off this Friday with two rounds of qualifying (4 and 7 p.m.), followed by the final two rounds of qualifying on Saturday (1:15 and 4:15 p.m.). Final eliminations are scheduled for 11 a.m. on Sunday, July 28. The event will be televised on FOX, including live final-round coverage starting at 2 p.m. (PT) on Sunday. Trackside camping is sold out for this weekend, but reserved and general admission tickets are still available. For more information, call 800-870-RACE or visit SonomaRaceway.com.