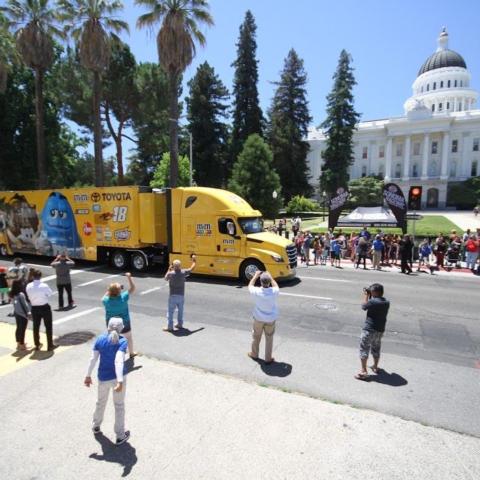 Monster Energy NASCAR Cup Series haulers will kick off the series' annual visit to Northern California  by rolling through the streets of Sacramento at the 9th annual NASCAR Hauler Parade on Thursday, June 20.

The NASCAR haulers, which will be en route to Sonoma Raceway for the Toyota/Save Mart 350, June 21-23, will make their way over the Tower Bridge and around the State Capitol on their way to greet Northern California NASCAR fans ready for the big race in Sonoma.

You can expect to see haulers from the Joe Gibbs Racing, Hendrick Motorsports and Team Penske racing teams, and most every other driver on the Monster Energy Series circuit. For almost a decade, Northern California and raceway officials have thrilled some of racing's most avid race fans with the unique parade in Sacramento.

The parade will begin promptly at noon on Thursday, June 20, as the haulers cross the Tower Bridge, heading for the State Capitol. The route is as follows:

Race fans can catch the haulers all along the parade route, but are encouraged to head to the corner of 11th and L streets for the best view.

In addition, State Senator Bill Dodd from 3rd Senate District will present the Transporter Drivers of Motorsports Association (TDMA) an official State Senate Proclamation, officially naming June 20, 2019, "NASCAR Day" in California. A $5,000 donation will also be made to the Sonoma Chapter of Speedway Children's Charities, the charitable arm of Sonoma Raceway, on behalf of TDMA.

Don't miss your chance to give the Monster Energy NASCAR Cup Series a warm Sacramento welcome as the haulers rumble through town on Thursday, June 20. Download the Sonoma Raceway app to view the parade route map, as well as best viewing points.