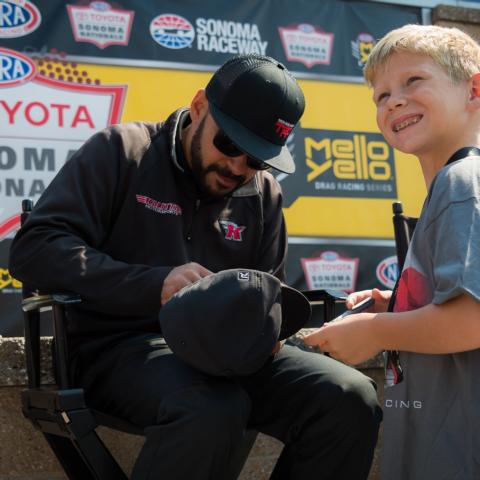 NHRA drag racing has always been a fan-friendly sport, as every event ticket includes access to pit areas where crews work on the race car and racers greet fans and sign autographs. As a welcome back gesture to the fans in 2021, Sonoma Raceway will provide a full weekend of complimentary access to Thunder Alley in front of the main grandstand as well as a Sunday morning pre-race track walk on the drag strip.

Friday will feature an exhibition of Sonoma Raceway’s Top the Cops program, where Bay Area Law Enforcement officials drag race area high school students in their squad cars, followed by a Sonoma-special Cacklefest. For the sixth year, a collection of nostalgia dragsters will light up the sky and fire up their engines in front of the Main Grandstand prior to Nitro qualifying under the lights.

Fans can also enjoy ultimate on-track access during pre-race ceremonies on Sunday morning by taking part in the Pre-Race Track Walk followed by a special pre-race Q&A. These ceremonies will kick off at 10 a.m. with final eliminations beginning at 11 a.m. Thirteen-year-old Maryann Kafoa of Santa Rosa, who attends Herbert Slater Middle School and the Santa Rosa School of Rock, will perform the national anthem.

Following final eliminations, race fans are welcome onto the racing surface to celebrate with the NHRA Sonoma Nationals champions in a new Winner’s Circle in front of the main grandstand, with access to everyone. Before leaving the track, fans are also invited to enjoy a delicious, free cool treat at the Eric Medlen Ice Cream Social, and encouraged make a donation to the Sonoma chapter of Speedway Children’s Charities.

The ice cream social honors the memory of Medlen, a native of Oakdale in the San Joaquin Valley, who succumbed to injuries sustained from a testing accident in 2007. Medlen was known for saying, “‘you can’t be sad when you’re eating ice cream.” The social continues to bring joy to fans year in and year out.

These elements and many more round out a jam-packed weekend of drag racing at the NHRA Sonoma Nationals. This marks the Camping World Drag Racing Series’ only stop in Northern California, and the only chance to witness 11,000-horsepower dragsters rocket down the drag strip. For more information or to purchase tickets for the NHRA Sonoma Nationals, visit www.SonomaRaceway.com, follow @RaceSonoma or call 800-870-7223.