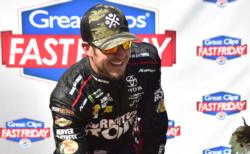 "Chat with the Champ" will serve as the centerpiece of the Pre-Race Show Powered by Friedman's Home Improvement just hours before the green flag falls on the Monster Energy NASCAR Cup Series main event in Sonoma.

The only way to access this special celebration is to purchase the raceway's NASCAR Total Access pass. Fans can secure stage-front access for the Q&A session with Truex Jr., who captured his first NASCAR Cup Series Championship by winning the season finale at Homestead-Miami Speedway last November.

The Total Access package includes a Sunday reserved seat, NASCAR Drivers' Meeting access, Pre-Race Pass for driver introductions and festivities, plus a FanVision unit for as little as $149; a savings of 20%.

"Sonoma Raceway is where I got my second NASCAR Cup Series win so it will always be a special place for me, and the race fans there are great," said Truex Jr., who was named Colorado's 2017 Sportsperson of the Year. "The weather is usually perfect and the track itself is very challenging so the excitement level is always high. I look forward to seeing everyone out there in just a few weeks."

Truex Jr's championship-winning moment ranks among the most emotional, feel-good moments in NASCAR history. His title-earning win at Homestead-Miami Speedway was his series-best eighth victory of the year in an effort that included an impressive 19 top-five and 26 top-10 finishes in 36 races. Eight of his top-five finishes were either runner-up or third-place showings.

The Pre-Race Show Powered by Friedman's Home Improvement will also feature the popular Patriots Jet Team six-jet air show, an aerial stunt performance by Steve Stavrakakis & Wild Thing Airshows, skydivers delivering the American Flag, driver introductions and a dynamic anthem flyover. The Total Access pass also includes exclusive access to the NASCAR Drivers' Meeting, which will be held on Turn 11 of the road course prior to the Chat with the Champ.