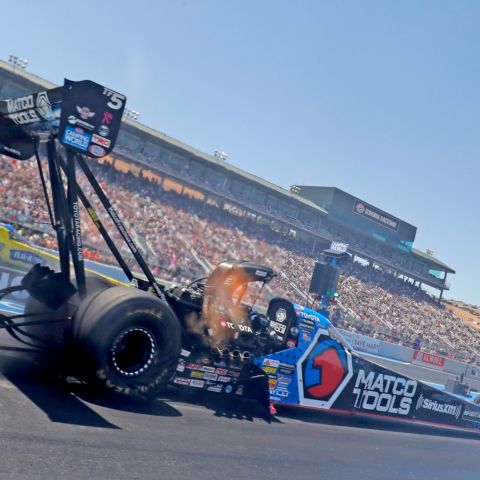 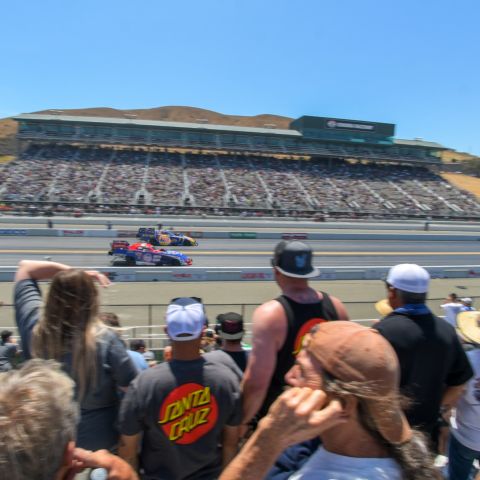 With 330-mph fire-breathing machines under the lights, the hills of Sonoma Valley will rumble to life during the 34th annual DENSO NHRA Sonoma Nationals this weekend.

The NHRA Camping World Drag Racing Series is set to deliver an incredible weekend, but before the cars are staged, and the tree is lit, here's a look at five can't-miss storylines fans should keep an eye on at the DENSO NHRA Sonoma Nationals.

After an unfortunate loss to Shawn Langdon this past weekend at Bandimere Speedway, local native Mike Salinas remains at the top of the leaderboard with four wins and 877 points this year.

Born in San Jose, California, Salinas was introduced to racing by his father, who raced his hot rods during the 60’s and 70’s at Fremont Drag Strip and Little Bonneville, which were all within proximity of Sonoma Raceway. Salinas made his professional debut in NHRA Top Fuel in 2011, with his first race at drag racing’s highest level in 2011 at Sonoma Raceway.

The Denso NHRA Sonoma Nationals remains widely known as the Salinas' home event even though Salinas remains winless at his home track. Nevertheless, Salinas knows to keep his points lead alive, he needs to look for his first ever win at Sonoma Raceway in front of friends and family.

Since 2002, Pro Stock Motorcycles have been blasting off at Sonoma Raceway; with insane speeds on these blistering bikes, records have been broken and re-written almost every year. The current speed record holder at 205.04 mph is Matt Smith, who also happened to be the previous record holder at 200.83 mph in 2019.

Smith, currently leading in the points after an impressive 34th career win at this past weekend’s race at Bandimere Speedway, is looking to take back-back weekend wins at Sonoma Raceway. It has been 15 years since his last win in 2007 when he defeated Eddie Krawiec. After that win in 2007, Smith would sit runner-up on three occasions, coming very close to victory.

So keep an eye out this weekend for Matt Smith and see if he can break his very own track record a third time as he also tries to defend his point-leading season.

There’s an old saying that, “Records are meant to be broken,” and this is certainly true at Sonoma Raceway. This track still holds some very impressive speed records but also some remarkable win records. Below are a few records at Sonoma Raceway that are in jeopardy of a new holder.

It seems like Toyota made it very clear they were looking to play their cards right in looking for a championship this year. With the newest addition of Steve Torrence to the team, Toyota seems to be in a solid position as it currently has three of their Top Fuel drivers in the top 5. As for Funny Car, only two of the top 5 drivers are in Toyota, and would you be surprised to see the leader in the Funny Car class is Ronn Capps, who also happened to be a new addition to the team?

In 2021 Torrence narrowly beat Leah Pruett in the final round after she went 3.768 at 323.04 in a thrilling side-by-side race. This year Torrence has shown he remains a force to be reckoned with as he stands fourth in points.

Last year, Hight in his Auto Club Chevrolet Camaro SS showed us he wasn’t giving up even if defending world Champ Matt Hagan had beaten him off the line. Instead, Hight chased him down to the finish line, winning by a mere 15 inches. This year Hight is showing he’s serious about winning another championship. Dominating the stats sheet with five wins and two runner-up finishes in the first 11 races.

Stanfield won a thrilling duel of young standouts in Pro Stock last year in the final round, slipping past rookie Dallas Glenn with a run of 6.557 at 209.56 in his Janac Brothers Chevrolet Camaro. The close win gave Stanfield his third career win. Unfortunately, Stanfield couldn’t overcome Matthew Hartford this past weekend, who had a .004 reaction time and his best run of eliminations, a 6.967. Even though Stanfield was alongside Hartford for much of the track, he faded before the finish line after his engine reportedly turned sour.

Stoffer capped off a resurgent weekend in Pro Stock Motorcycle in 2021, winning for the first time since 2019 by taking out Andrew Hines in the final round with a run of 6.798 at 197.36 on her Ray Skillman/Big St. Charles Suzuki. The Panorama City native had an unfortunate weekend at Bandimere Speedway when she was defeated by Marc Ingwersen. Stoffer, currently in fifth in the points, looks to defend her win from last year in the hopes of a championship opportunity.

TICKETS:
Weekend passes to the Denso NHRA Sonoma Nationals start at just $135, with single-day tickets available starting at $60. Kids 12 and under get in for $75 all weekend long. For more information, visit www.sonomaraceway.com/events/nhra-sonoma-nationals/tickets/ or call 800-870-RACE (7223).

Keep track of all of Sonoma Raceway's attractions and events by following on Twitter and Instagram or becoming a Facebook fan. Also, keep up with all the latest news and information with the Sonoma Raceway mobile app.