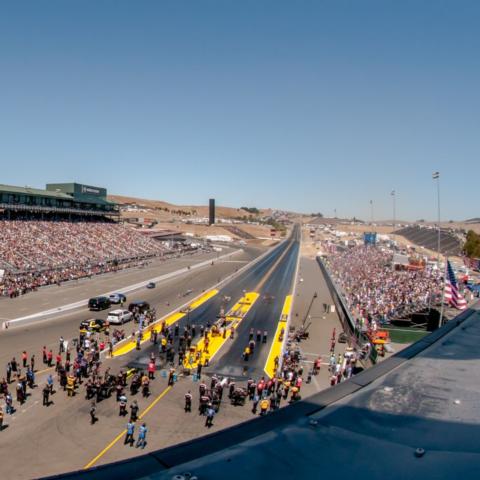 Two years ago, Clay Millican was less than three feet away from picking up his first victory at scenic Sonoma Raceway. The popular Top Fuel driver lost in the final round in agonizing fashion in 2019 and, two years later, Millican will look to finish the job as the NHRA Camping World Drag Racing Series returns to Sonoma Raceway for this weekend’s NHRA Sonoma Nationals.

It’s the second race of the NHRA’s famed three-race Western Swing and Millican brings plenty of momentum in his 11,000-horsepower Parts Plus dragster after starting the trek with a semifinal showing in Denver. He’s excited to welcome back a Sonoma crowd clamoring for its first 330-mph nitro action since the 2019 campaign due to the COVID-19 pandemic, and Millican is hopeful to be celebrating with the fans in the winner’s circle by the end of the weekend.

“Sonoma has such an awesome, unique layout and as a racing fan, I just love it,” Millican said. “It’s a spectacular facility and it’s just a cool place. We’ve run well there and it’s a fun place to race, so hopefully we can continue to perform well. For drag racing to get back to California, it’s very exciting. It’s probably going to be standing-room only in Sonoma. The crowd in Denver was just absolutely incredible and I really loved it, and I think Sonoma is going to be the same way.”

Billy Torrence (Top Fuel), Robert Hight (Funny Car), Greg Anderson (Pro Stock) and Andrew Hines (Pro Stock Motorcycle) were the 2019 winners. This year’s event will be televised on FOX, including live final eliminations coverage starting at4:00 p.m. ET on Sunday. It is the ninth race of the 2021 NHRA Camping World Drag Racing Series season and the middle race in the rigorous Western Swing, but Millican likes what he sees out of his team in recent races.

He believes his team is on track to challenge for victories, but it won’t be easy when there’s a Torrence involved. In this case, it’s dealing with three-time defending world champ Steve Torrence, who has won four of the past five races this year to hold a commanding points lead, including last weekend in Denver. Millican will also have to deal with the likes of Antron Brown, track record-holder Leah Pruett, Brittany Force, Shawn Langdon, Doug Kalitta and Justin Ashley, but the veteran likes the direction his team is trending.

“It’s just one of those things where (crew chief) Mike (Kloeber) is finding the sweet spot on what the car likes,” Millican said. “He’s really getting a good handle on it and we’re not hurting the car. You can do really, really good things when you’re not hurting things. I’ve got so much confidence in how the car is running and what our people are doing right now, it’s really exciting. The car is running really well right now and I’m definitely super excited to be rolling into Sonoma.”

In Funny Car, Hight has put on one impressive show after another in Sonoma, winning the past two events at the facility. He also had an incredible run of 339.87 mph in 2017 and has three overall wins at one of his favorite races on the NHRA tour. With the chance to race under the lights during the opening qualifying session, Hight is eager to put on a show in front of a huge area fanbase as well.

He’ll need to be on point to pick up his second win of the 2021 season as Hight faces off with a talented Funny Car field in Sonoma. The class has seen six different winners in eight races thus far, with defending world champ Matt Hagan becoming the latest in Denver. Everyone is currently chasing points leader Bob Tasca III and John Force, who each have two victories this year, but going off his track record, Hight will be a major threat in Sonoma. Others to watch include Cruz Pedregon, four-time race winner Ron Capps, J.R. Todd, who has won in both Top Fuel and Funny Car in Sonoma, Tim Wilkerson and Alexis DeJoria.

“We’re used to getting after it and we just missed it a couple times (in Denver),” Hight said. “Luckily, we are right on to the next race, and we can turn things around. Sonoma has been good to this team in the past, and hopefully that’s the case this year, too.”

Anderson will look to strengthen his Pro Stock points lead and continue his terrific start to 2021. He’s won six times at Sonoma and a seventh would also give him 97 victories, tying him with Warren Johnson for the most in class history. Standouts like defending world champ Erica Enders, Aaron Stanfield, rookie Dallas Glenn, Matt Hartford and 2015 Sonoma winner Chris McGaha will try to prevent that.

In Pro Stock Motorcycle, Matt Smith will try to keep his remarkable run going, as the defending world champ and points leader is after his third straight win this season. To get it, he’ll have to get past the likes of Denver runner-up Eddie Krawiec, teammates Scotty Pollacheck and Angie Smith, defending event winner Hines, Angelle Sampey, Steve Johnson, Karen Stoffer and Joey Gladstone.