More than $70,000 Raised for Fire Relief at Sonoma Raceway's Laps of Appreciation 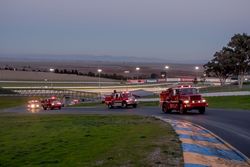 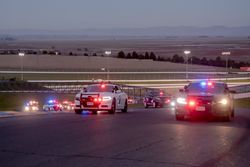 Hundreds of community members enjoyed a special evening of fundraising and sharing gratitude at Sonoma Raceway on Tuesday evening at the raceway's Laps of Appreciation event.

The event, which was highlighted by rides in emergency vehicles around the raceway's 12-turn road course, was designed to give the community an opportunity to thank public safety personnel involved in the response to October's fires. In addition, the fundraiser generated more than $72,600 for the Sonoma County Resilience Fund and the Redwood Valley and Santa Rosa Community Recovery Fund.

"Our goals were to raise some money and to provide a fun environment for community members to interact and thank representatives of the agencies who did so much on all of our behalves during the recent fires," said Steve Page, president and general manager of Sonoma Raceway. "I think the event was a success on both fronts."

"It's great to see the community coming out and supporting us and all the different agencies that are here and having us come together to support the community, as well," said Brian Clarke, fire captain for the Lakeville Fire Department. "We're having a great time."

"We just rode in an ambulance and a fire truck, and it was awesome," said Holly Wildey from Portland, Oregon. "I've never been in an emergency vehicle, so it was pretty cool. We come down for the NASCAR races and were notified of this fundraiser and wanted to come down from Oregon to participate and to give back."

Proceeds were raised through a variety of fundraising efforts, including donations for ride tickets and Sonoma Strong t-shirts and NHRA Salutes First Responders coin sales, as well as a $50,000 match from Sonoma Raceway and a $10,000 match from NASCAR, as well as a generous donation from the Save Mart Companies.