B. Force, Capps, Anderson and A. Smith Claim No. 1 Spots at NHRA Sonoma Nationals 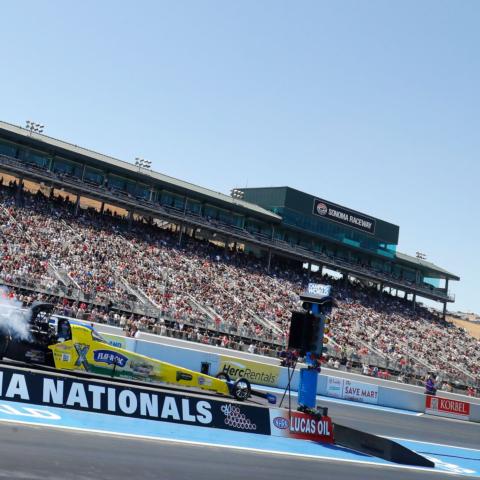 Looking for her first Top Fuel victory of the 2021 season, Brittany Force put together a trio of strong runs in qualifying at Sonoma Raceway, ending up in the No. 1 spot on Saturday at the 33rd annual NHRA Sonoma Nationals.

Force’s impressive run of 3.694-seconds at 329.42 mph from Friday in her 11,000-horsepower Flav-R-Pac dragster gave her the No. 1 position for the second straight race. It’s also her fourth No. 1 qualifier of the year and 24th in her career, and she’ll open raceday against Ron August. She also posted a stout run of 3.716 at 330.31, which is the fastest run of the weekend in the class, to close out qualifying, giving Force added confidence she can pick up a win after two runner-up finishes this year.

“We want that win,” Force said. “In Ohio a few weeks back, we had a runner-up finish and it felt good to get there, but we want to complete the thing and end up in the winner’s circle. We had outstanding runs from my entire team this weekend. We had three solid runs and I’m happy about that, and I’m looking forward to raceday tomorrow.”

After struggling during the first two sessions, three-time defending world champ and points leader Steve Torrence shot to the second spot in the final qualifier, going 3.710 at 329.67 as he looks to keep his shot of sweeping the Western Swing alive. Antron Brown will start raceday from third after going 3.724 at 326.71.

Funny Car’s Capps maintained the No. 1 position on the strength of his run of 3.897 at 328.78 from Friday in his 11,000-horsepower NAPA Auto Parts Dodge Charger SRT Hellcat, giving him three No. 1 qualifiers this year and 28 in his longtime career. Capps, who is looking for his first victory of the season, will meet Tony Jurado in the opening round of eliminations and is focused on getting a win at a track that means a great deal to him.

“I’ve been doing this long enough, and this whole team gives me the confidence,” said Capps, who has four Sonoma wins. “Qualifying well is all about the team. I can’t say enough for the fans out here. I love all of these fans.”

Alexis DeJoria finished in the second spot after her run of 3.898 at 325.61 from Friday, while Capps’ Don Schumacher Racing teammate, Denver winner Matt Hagan, will look to win his second straight race after qualifying third with a 3.909 at 328.94.

Anderson remained dominant in Pro Stock qualifying, continuing his torrid pace in that regard with his run of 6.513 at 210.44 in his HendrickCars.com Chevrolet Camaro. It now gives Anderson his seventh No. 1 qualifier in eight Pro Stock races this season and an incredible 113 in his standout career. Anderson, the current points leader, will open eliminations against Steve Graham, again trying to gain his 97th career win and tie Warren Johnson for the most in Pro Stock history.

“The HendrickCars.com Chevy is fast, as it has been all year and it’s all on me to try and get it done tomorrow at one of my favorite racetracks,” said Anderson, a six-time Sonoma winner. “I can’t wait to get after it.”

KB Racing teammate Kyle Koretsky finished off two solid days of qualifying by taking the second spot with a run of 6.522 at 211.06 and defending world champ Erica Enders is third thanks to her 6.524 at 210.67.

Smith capped off a wild, record-setting day of qualifying in Pro Stock Motorcycle by earning her first career No. 1 qualifier with an impressive run of 6.736 at 203.06 on her Denso Auto Parts EBR. Smith’s run came during the final qualifying session after watching her husband, Matt, take the top spot and make the fastest run in class history with a pass of 205.04 earlier in the day. But A. Smith answered with her strong pass to close out the day, giving her plenty of momentum heading into eliminations.

“It is so tough out here and for me to be No. 1, I’m so proud of this Denso team,” A. Smith said. “We did a motor swap in 30 minutes on my bike and I was pretty bummed after the last round. To go my career-best, to go 203 (mph), I couldn’t be more proud of this entire team. Everyone that helps us, I couldn’t be more proud to give them a yellow hat as the No. 1 qualifier and hopefully I can get a blue (winner’s hat) tomorrow.”

Karen Stoffer made a big jump in the final session as well, going all the way to second thanks to her 6.750 at 198.61. Steve Johnson is third after his pass of 6.751 at 199.94. Points leader M. Smith, who won in Denver to open the Western Swing, got bumped to fourth in the final session.

Eliminations for the NHRA Sonoma Nationals begin at 11 a.m. PT on Sunday.